I've got a lot of grievances with Lego Marvel Super Heroes on Wii U and now you're gunna hear about them. Ok maybe just one. Or Two. First off, when playing two player either split screen or primary/gamepad mode the frame rate can really really drop bad. Like sub 10 FPS bad. Not too often but it happens.

I want to support Nintendo I really do. And all things considered I don't care what platform I have my lego games on, PS3, Wii U, PC, Mac.... For the type of gameplay Lego games have its to my benefit to have it on a console connected to my TV. But if you are going to make irrational control scheme choices for no good reason on Wii U my hands are kind of tied. To PS3.

Travelers Tales, get it together man!
Posted by -Rakden- at 12:38 PM No comments:

Maybe I should do this. Probably kill me but it's worth a shot.
Posted by -Rakden- at 7:24 AM No comments:

Decided to do a run through all the main Final Fantasy games. Currently playing Final Fantasy 1 NES. Just made it past Marsh Cave.
Posted by -Rakden- at 1:28 PM No comments:

Since beating Saints Row The Third (which I will be returning to for the new expansion this fall) I have sunk my teeth into Xenoblade Chronicles. I have to admit this game is really getting it's teeth into me. It's got a neat crafting system, an interesting MMO style combat engine, and one of the most unique settings I've seen in a long time. I.E. You exist on the back of a fallen titan, essentially a fallen god.

The story is sort of Cliche' JRPG fodder, but I like JRPGs so I'm ok with it.
Posted by -Rakden- at 7:57 AM No comments:

It's time to revamp my gameplay and start hammering out more games. And I'll document my progress here.
Posted by -Rakden- at 8:29 AM No comments:

Does anyone quite understand this BitCoin Fad?

Feel free to mine a bit for me if you feel so inclined. 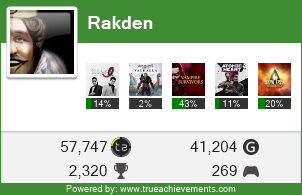